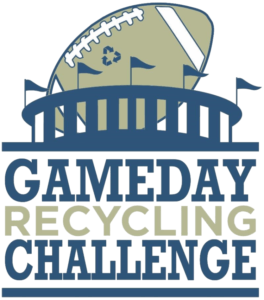 RESTON, Virginia (Jan. 16, 2020)   Louisiana State University battled head-to-head with Clemson University for both the National title in football and the #1 spot in “Total Recycled” during the 2019 GameDay Recycling Challenge (GDRC) — the nation’s premiere collegiate football waste reduction competition. GDRC congratulates Louisiana State University for coming out on top in both National Football Championship and the top spot for “Total Recycled” during the 2019 season.

The competition in the national category for ”Top Diversion Rate” was fierce during the 2019 season, with slim margins between the top schools. GDRC congratulates Ohio University for their rise to the #1 spot in”Top Diversion Rate” during the 2019 compeition, with an incredible 93 percent diversion rate for a game with over 15,000 attendees. Additionally, several competitors have received this year’s GameDay honorable mentions including the Ohio State University for their excellence in benchmarking and data tracking and Auburn University for their back-to-back years in excellence for promoting the GameDay Challenge through social media, touting them as “Schools To Watch”.

“The 2019 GameDay Recycling Challenge was special this year with top contenders LSU, Clemson and the Ohio State University playing in the 2019 College Football National Championship Playoffs and competing in one of the most impressive seasons in college recycling,” says Stacy Wheeler, RecycleMania Inc. president.  “College athletics and their operational teams are uniquely positioned to engage and influence its fan base about environmental stewardship. Most GameDay Challenge schools have stadiums that have been pushing green initiatives for 10 or more years. Our GameDay winners advance the supply chain in their local and regional circular economies and now have a fan base that expects and wants green practices at every home GameDay. That’s progress.” 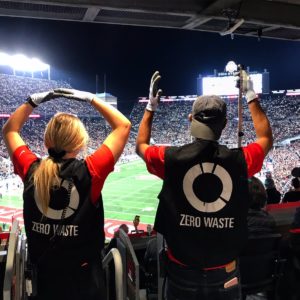 “LSU continues to improve its recycling efforts each year through the use of creative and innovative methods, development of new public and private partnerships, and higher levels of participation by our students, faculty, and staff volunteers.”
Sarah Temple, Assistant Director of Campus Sustainability at Louisiana State University

“GameDay Challenge is an excellent opportunity to build our recycling culture by engaging with thousands of fans all at the same time. This year, [Ohio University] is particularly proud of introducing an opt-in compost program to our tailgaters as well as setting up an in the stadium sorting station.”
Andrew Ladd, Recycling and Zero Waste Manager at Ohio University

The 2019 GDRC pitted 50 colleges and universities in a fun and friendly competition designed to engage college football fans to see who could recycle the most and reduce the most waste. The competition reached 6.9 million fans at 115 games, based on reported stadium attendance numbers. Participating schools recycled or composted 1.8 million pounds of game-day waste during the fall season, which broke down to recycling over 1.5 million pounds of bottles, cans, paper, cardboard and other materials. In addition, more than 430,588 pounds of organic materials were composted or recovered, including pre- and post-consumer food waste and compostable serviceware. These collective efforts prevented the emission of 1,801 MTCO2E (metric tons of carbon dioxide equivalent) of greenhouse gases, equivalent to removing over 383 cars from the road for a year, or 4.5 million miles driven. To view full results, click here.

The GDRC ranks participating schools based on the quantity of recyclables, food organics and other materials diverted from the landfill at college football stadiums and tailgating areas. During the competition, schools tracked weights for individual games, with the totals used to rank schools nationally and by athletic conference. Registration for the 2020 competition will kick off in early August 2020.

About the College & University Recycling Coalition

The College and University Recycling Coalition (CURC) is a membership-based nonprofit organization whose mission is to advance recycling and sustainable materials management at colleges and universities. CURC represents a vibrant community of recycling professionals in higher education on over 1,000 college campuses across the United States. CURC members connect with each other through an active email listserv and at gatherings in conjunction with state and national conferences. CURC provides support to collegiate recycling programs through technical assistance, education, and training, including a webinar series, annual workshops, and the development of best-practices manuals and toolkits. For more information, visit curc3r.org.

RecycleMania launched in 2001 as a friendly challenge between Ohio University and Miami University to increase recycling on their campuses. The competition has expanded from two schools in 2001 to engaging hundreds of campuses each year. Over an eight-week period, campuses compete to see which institution can minimize their waste and recycle the most.  In 2020, the program changed its name to the Campus Race to Zero Waste to better reflect the goal of the program, helping colleges and universities on their pathway to zero waste. The Campus Race to Zero Waste program is managed by National Wildlife Federation and governed by a non-profit 501c (3) organization called RecycleMania, Inc. made up of a board of directors who are recycling and sustainability managers from a variety of participating universities. For complete competition details, visit www.CampusRacetoZeroWaste.org.

The National Wildlife Federation, America’s oldest and largest conservation organization, works across the country to unite Americans from all walks of life in giving wildlife a voice. We’ve been on the front lines for wildlife since 1936, fighting for the conservation values that are woven into the fabric of our nation’s collective heritage. For more information, visit nwf.org.